Previously published and sold comic strips.  Each ran as a series for a period of time and was developed specifically for the publication audience.   These are just a couple of samples.

This strip ran in a golf newspaper distributed in Georgia and featured a main character consumed by golf during retirement.  The gags and set ups were left up to me. 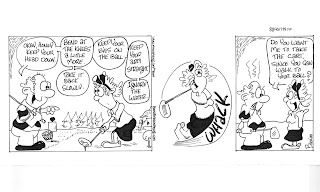 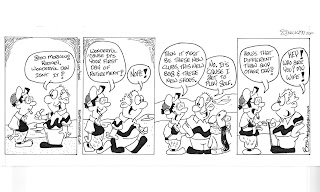 This strip was developed for another golf oriented publication but had the extra twist that the two publishers wanted to be the main characters.  We used their real names and used their other jobs as talk radio host of a weekend golf radio show as the back story.  They didn't contribute to the gag writing.
A typical monthly publication would run 4 strips.

This strip ran in a monthly publication that catered to the cigar industry.  Again the gags and story line were completely left up to me.

Boon - noun: My nickname from high school
Dawg - noun: The southern way to say dog, a nod to my alma mater the University of Georgia.
Goggle - verb: Look with wide open eyes, typically in amazement or wonder.